21 Paranormal Podcasts To Keep You up All Night Long 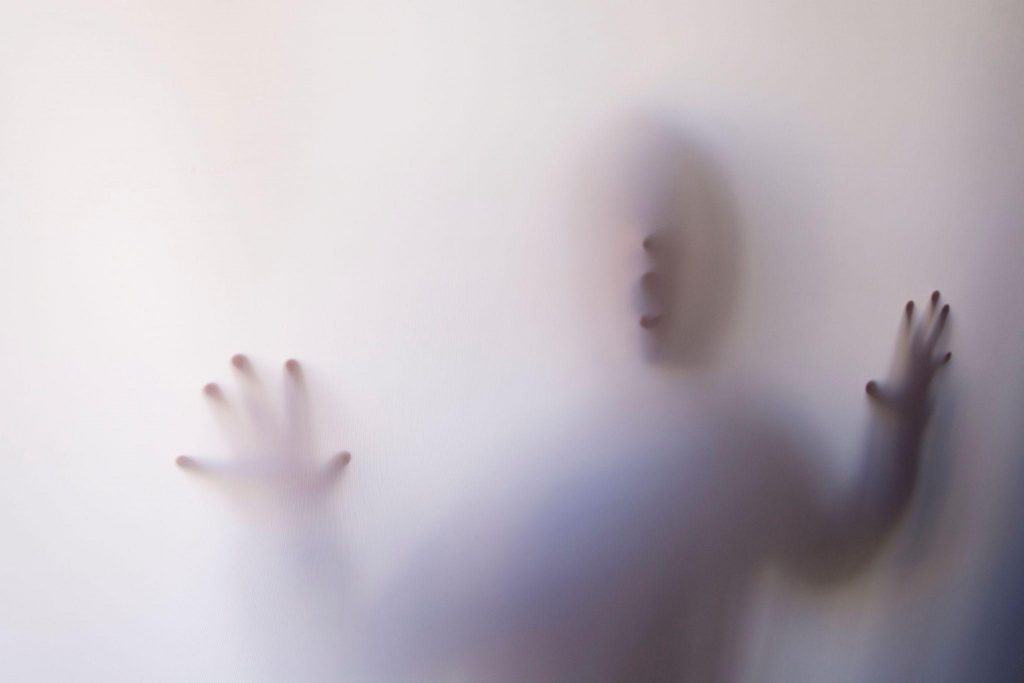 It doesn’t need to be Halloween for you to get a good fright! Chill-seekers who just so happen to be fans of podcasts too can find plenty of scary stories to enjoy in the dark. Queue up these 21 paranormal podcast episodes, guaranteed to keep you up all night.

You’ll need to subscribe to the Luminary Channel on Apple Podcasts to get full access to the NPR-distributed show, but there are a few free episodes currently available, including “Green Demon,” which recounts a South African man’s experience fending off a demon terrorizing his father.

“Some stories really resonate and impact our audience,” he says. “I think it’s because they are personally very relatable or they are simply so incredible as to almost be an episode of ‘[The] Twilight Zone’ … There are stories that are so bizarre that they just stick.”

Case in point: “The Roadhouse Saloon” episode, which features the story of a caller who went into a bar that almost absorbed her and her friend into an alternate reality.

Estate sale fans seeking a chill might want to check out this ‘Campfire’ episode, which features the tale of a man who buys an antique mirror and ends up with an infestation of ghosts in his home. (Check out this YouTube video to see a picture of the mirror in question.)

“[It’s] a compelling story that has not changed on multiple retellings,” Harold says.

On the bi-weekly “Ghostly Podcast,” believer Rebecca Rivers and skeptic Patrick Harrington debate haunted legends, real-life ghost stories and paranormal-related true crime. Listeners can then vote on the podcast’s website about whether they believe the spooky tales (or topics) are real.

“The episode where we probably came the closest to agreeing was the ‘Near Death Experiences’ episode,” Rivers says.

In it, a listener’s letter about his own terrifying ghost-fueled “NDE” kicks off a spirited debate over whether these incidents qualify as paranormal.

“For us, the best episodes are the ones with a strong history and interesting evidence to support the haunting activity,” Rivers says. She suggests giving their Bell Witch episode a listen on Halloween.

In it, the “Ghostly” hosts explore one of the oldest ghost stories in the U.S. in which an 1817 Tennessee home is tormented by a vengeful witch’s spirit. The legend has inspired many motion pictures, including “The Blair Witch Project” and “An American Haunting.”

Rivers says one of Ghostly’s scariest episodes covers Robert the Doll, a handmade toy that purportedly terrorized various child owners and their families beginning in the early 1900s. (Robert the Doll currently resides in the East Martello Museum in Key West, Florida.)

“Even skeptic host Pat had to concede that some pretty shady things happened to Ghostly once we decided to record this episode,” she adds.

“The more I do ‘Paranormal Almanac’, the more terrifying [the] ghost stories I hear,” Sandvig says.”In fact, since the pandemic I have been doing live call-in shows and my listeners never cease to amaze me with their own personal paranormal stories.”

Check out one of the podcast’s most recent bonus episodes in which an Arizona woman encounters what could be a banshee, owl … or Aztec death whistle.

8. Paranormal Almanac: The True Story of the Moffitt Haunting

In one of Sandvig’s favorite episodes, he interviews Deborah Moffitt, a California woman whose family was allegedly tormented by a knife-apparating, blood-sacrifice-demanding demon named “Mr. Entity” for close to six years in the 1980s.

The story “should be as huge as the Amityville Horror or the Exorcist but just hasn’t gotten the attention,” Sandvig says. “To hear [Moffitt’s] own terrifying ordeal in the house where it took place really gave me chills down my spine and gave credence to her story.”

In this popular Paranormal Almanac episode, Sandvig shares creepy tales involving kids’ imaginary friends and invites listeners to weigh in on whether these incidents are actually paranormal. (Among the creepiest, a three-year-old overheard refusing to hand a knife to an unseen “Jane” looking to harm his family.”)

“Something about kids’ imaginary friends that turn out to be ghosts has always terrified me and these true stories are equally bizarre and scary,” Sandvig says.

On “Paranormalish,” host JoJo Wright combines his obsession with the supernatural with a dash of pop culture. (Celebrities’ ghost adventures are a recurring theme.)

“The stories that I choose for the podcast are generally ones that have a believable witness with an unbelievable story,” Wright says. A recent favorite features “Grownish” actress Francia Raisa and comes with a bit of a spoiler (alert!) in its title.

12. Paranormalish: Draw Kept Opening … by Themselves

Fans of Stephen King and/or “The Shining” will want to check out this spooky episode of ‘Paranormalish,” in which Wright and a friend share their experience visiting the infamous Stanley Hotel and (you guessed it!) drawers keep opening by themselves.

On the “And That’s Why We Drink” podcast, hosts Em Schulz and Christine Schiefer mix humor with their paranormal obsessions.

“In episodes 173 and 180 in particular, I discussed a possessed mongoose living in the walls of a family’s house, and a woman who fell in love with her alien abductee,” Schulz says. “Both paranormal cases offered a lot of opportunities for humor to balance out the intensity of Christine’s dark, in-depth crime reports.”

12. And That’s Why We Drink 53: The Perm of the Century and a Call to the Apron Factory

If you really want to psych yourself out while greeting trick-or-treaters, give Episode 53 of ‘And That’s Why We Drink’ a listen. Schultz considers it one of their scariest on record, largely due to their discussion around a phenomenon known as “The Black-Eyed Kids.”

“The Black Eyed Kids is a legend about entities from another realm disguising themselves as children and showing up at your house, demanding to be let in,” Schulz explains. “The BEK topic was heavily requested, but it is also particularly scary because of the several first-hand experiences I was able to find online.”

13. Monsters Among Us Podcast: The Mirrored Men Special

If the Black Eyed Kids don’t have you sufficiently spooked, check out this episode of the paranormal podcast “Monsters Among Us.”

“The Mirrored Men are three dark and terrifying entities that move in unison,” Derek Hayes, the creator and host of Monsters Among Us Podcast, says.”Everyone who has ever encountered them has experienced missing time, and an intense feeling of terror and dread. This special episode includes every Mirrored Men call we’ve ever received, and it’s the stuff nightmares are made of!”

Monsters Among Us Podcast covers a wide variety of spine-tingling topics, from aliens to bigfoot to ghosts and psychic phenomena.

“Something that makes a story particularly scary or worth exploring is when you can tell in the storyteller’s voice that they’re genuinely scared or disturbed,” Hayes says. “They’re convincing and compelling, and all of the best supernatural stories have a human element.”

Halloween commuters can queue up another of Hayes favorite episodes: “Terrifying Trucker Tales,” which covers creepy encounters on the road.

Host Darren Marlar has been sharing true stories of the paranormal on his podcast “Weird Darkness” every day of the week for the last few years.

“I did get really creeped out when narrating ‘The 67 Exorcisms of Anneliese Michel,’ which the film, “The Exorcism of Emily Rose” in 2005 was based upon, because I was able to find actual audio of her speaking with the demon’s voice and include it in the episode,” Marlar says. “I could only handle just over a minute of it before I had to cut it off.”

Anyone planning to commune with spirits on All Hallows’ Eve might want to queue up this episode of “Weird Darkness,” which features numerous stories from people who have had unpleasant experiences after using spirit boards, holding séances or playing the Charlie, Charlie Challenge.

“Personally, I find the stories of Ouija boards disturbing,” Marlar says. “I just don’t think it’s worth the risk.”

On the Paranormal Mysteries podcast, Nic Ryan covers a multitude of topics, including ghosts, aliens, UFOs, bigfoot, monsters and witchcraft, but the host is partial to spooky tales that have a bit of an environmental theme.

“The episodes or topics that stand out the most to me typically involve experiences that occur in the wilderness and involve missing time, strange creatures, or experiences where the person believes that they were ‘almost taken,’” Ryan says.

Case in point: “Episode 66: Almost Lost in the Wilderness,” which recaps, among other things, a story in which a hiker runs home with the feeling of “death at [their] heels.”

Ryan is also fascinated by stories that deal with fairies or fae folk, which are covered in depth in this episode of Paranormal Mysteries.

“These types of stories really hit home for me because I have spent most of my life in or near the woods and I have always thought of the forest as a place of beauty and mystery,” Ryan explains.

Lex Wahl has been sharing listeners’ paranormal stories since his podcast “Anything Ghost” began in 2006.

“Over the years, I’ve had many great stories sent to me, but every few years, one comes in that enchants my listeners and generates all kinds of email and messages,” he says. One such story was shared in Episode #241. It involves a San Francisco woman, a haunted apartment and a deadly doppelganger.

If you need a break from true ghost or crime stories, check out The NoSleep Podcast, a horror fiction show that’s decidedly not for the faint of heart.

“We are well-known for our season finale episodes, which feature productions that are akin to full-length audio ‘movies,’” host and producer David Cummings says. ”One of the best we’ve ever done is called ‘Whitefall’ by C.K. Walker. A story of people trapped in a bus station during a winter storm, it deals with survivalism and people pushed to their limits of humanity.”

You can give “Whitefall” a listen here.

Hosts Dave Schrader and Tim Dennis have been discussing paranormal tales and phenomena on Darkness Radio for close to 16 years. The podcast airs every Wednesday and Thursday on Stitcher.

“The bar is decently high for our show,” Dennis says. “A ghost knocking Peepers the teddy bear off your bed isn’t going to get it done! You know when you go over a story and there is a chill or two that comes over you, or the light clicks on and you become inquisitive and want to know more … that you have the beginning of something that you can really sink your teeth into.”

Close out Halloween by checking out this episode, which covers The Black Monk of Pontefract, an infamous poltergeist haunting that took place in the late 60s.

This article was produced and syndicated by MediaFeed.org.