25 of the Best Things to Do in Dallas This Summer 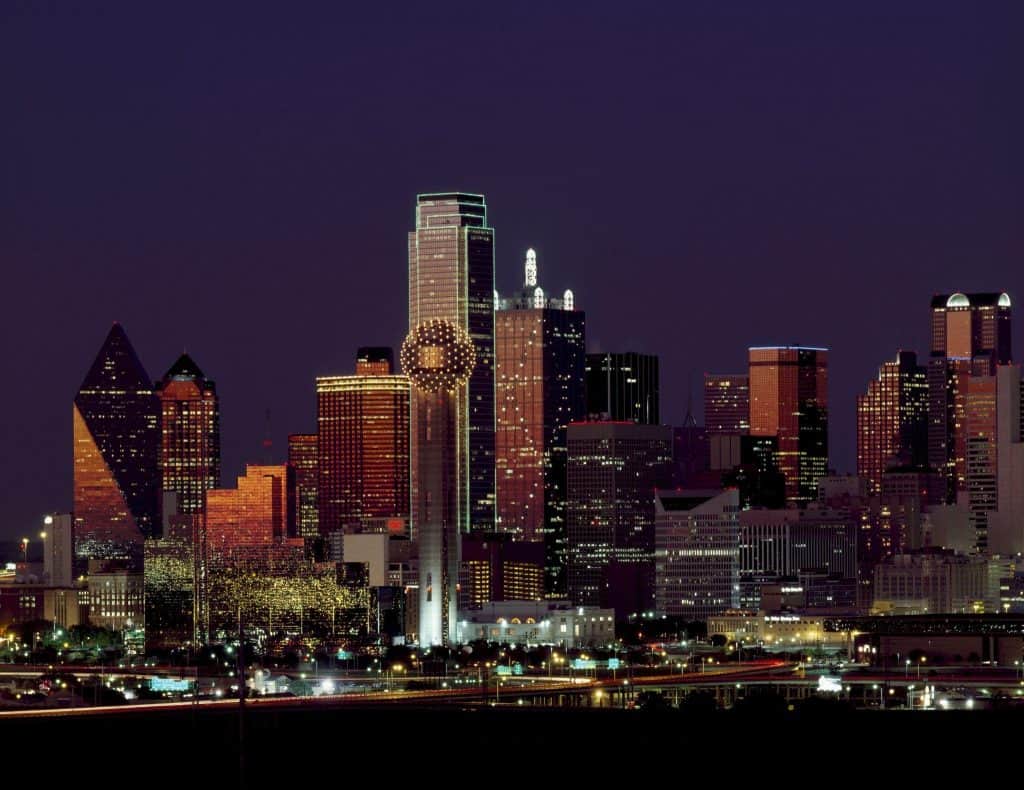 Summer’s coming, and it’s time to get out and explore! If hot fun in the summertime is your thing, then exploring Dallas, Texas, should be on your summer destination list.

From cowboys to culture, food to football, Dallas has a wide array of activities that will excite any traveler.

Take a tour through the “Big D,” as some call it, with these 25 best things to do in Dallas this summer.

In 1963, JFK was shot and killed by a man aiming a gun through the corner window of the sixth floor of this building. He was famously riding in a motorcade through Dealey Plaza at the time.

The museum exhibit on the sixth floor takes visitors through the early 1960s and through that fateful November day. The tour includes the arrest and subsequent assassination of Lee Harvey Oswald, as well as the aftermath of JFK’s assassination.

Along with the main JFK exhibit, the museum also contains information about the history of the Book Depository building and various temporary exhibitions and events.

Admission is $18 per adult and free for children five and younger.

The 5.2-acre Klyde Warren Park is in downtown Dallas. It is quite literally sitting upon the recessed 8-lane Woodall Rodgers Freeway, thanks to over 300 concrete beams with spaces between them that make up the deck.

The beams and spaces form trenches that act like planter boxes for trees and other vegetation, while Geofoam and specially designed soil keep the deck from being too heavy so it’s structurally sound.

With more than a million visitors each year, the park offers free daily programming for the public. These activities include yoga, outdoor concerts, and films. The park also features a children’s park, dog park, featured food carts, and special events.

Most know that our 43rd president hails from Texas; if you’re a “Dubya” fan, you should check out the George W. Bush Presidential Library and Museum.

The 13th presidential library promotes an understanding of the presidency, focuses on when George W. Bush was president, and holds records and artifacts from his administration.

Tickets can be purchased for $26 per adult, while children 0-4, active-duty military, SMU students, faculty, and staff can visit for free.

Cowboys and the Old West are integral to the spirit and culture of Texas. Those hoping to look the part can find their gear at Wild Bill’s Western Store. Grab yourself a bola tie, Stetson hat, or even a custom pair of cowboy boots.

The store has hooked up celebrities from Bon Jovi to Mick Jagger and created costumes for several western movies and shows. While shopping, you can even wet your whistle with a Texas Shiner Bock beer.

The Reunion Tower is a 561-foot-high observation tower and one of the most recognized landmarks in Dallas.

The tower is part of the Hyatt Regency Hotel complex located in the Reunion district of downtown Dallas. It boasts fabulous views of the city from the GeO-Deck observation area. You can even rent the space for special events and even purchase date night packages!

Tickets start at $19 for adults and vary depending on the package.

You may have been to a zoo, but have you been to the Dallas Zoo? The Dallas Zoological Park is the oldest and largest in Texas at 106 acres. It is home to more than 2,000 animals from 406 species.

Aside from its regular zoo residents, you can go on a Jurassic journey exploring the Dino Safari exhibit or help save baby turtles at South Padre Island.

Tickets to the zoo range from $8 to $21 based on seasonal attendance. The turtle experience is $225 per person.

Exhibits include the following gems:

The Frontiers of Flight Museum is in the southeast corner of Love Field on Lemmon Avenue. It focuses on the history of aviation and space exploration within the Dallas/Fort Worth area.

Highlights include artifacts from the airship Hindenburg, the Apollo 7 Command Module, and over 200 World War II aircraft. If you love space exploration but want to get out of the heat, this indoor museum is one of the best things to do in Dallas this summer.

Tickets are $10 for adults and drop from there.

Although Texas may not be the first place that comes to mind when thinking of human rights issues, the Dallas Holocaust and Human Rights Museum seeks to offer just that.

Founded by Holocaust survivors residing in Dallas, the museum is located in the West End Historic District. It is a short distance from the Sixth Floor Museum.

The museum’s mission is to teach the history of the Holocaust and advance human rights to fight prejudice, hatred, and indifference. Along with exhibits, the museum features archives and a research library.

For those looking to enjoy the outdoors this summer in Dallas in a unique and thrilling setting, one of the best things to do in Dallas is to spend the day at Six Flags Over Texas.

This 212-acre amusement park is situated between Dallas and Fort Worth. It features themed areas and attractions, including the tallest and fastest roller coaster in Texas and the Hurricane Harbor Water Park. If you want to cool off at a water park, this is the best summer activity in Dallas to have some fun.

Tickets start as low as $34.99 a person. Unlimited summer admission passes are available for $54.99.

Pioneer Plaza is a large park in downtown Dallas that hearkens back to Dallas’ cowboy and ranching roots. A large sculpture dominates the plaza, commemorating the nineteenth-century cattle drives along the Shawnee Trail, the earliest route moving Texas longhorn cattle to northern markets.

In addition to the sculpture, historic brands from Texas ranches are featured on the sidewalk on the west side. This includes the famous Four Sixes (6666) Ranch featured in Yellowstone.

The Bonnie and Clyde Tour

Infamous outlaws, Bonnie Parker and Clyde Barrow grew up around Dallas. Dallas was the setting for many of the crime and murder sprees that ended with their deaths in a shootout with police in 1934, in Louisiana.

This three-hour tour takes you inside their time in Dallas. It includes stops at Clyde’s family home, the café where Bonnie worked, crime sites and hole-ups, their graves, and many other sites.

The tour includes transportation around Dallas and a guide with family connections to the famous outlaws.

While the area has been occupied for thousands of years, settlers first established the West End Historic District as a trading post on the east bank of the Trinity River. It’s considered the site of the modern founding of Dallas, over 150 years ago.

Eat at a Rooftop Restaurant

Dallas is known for its gorgeous skyline, and other than the Reunion Tower, the best way to enjoy the views is from one of many rooftop restaurants and bars sprinkled throughout the city.

Check out this list of the best rooftop bars in Dallas to find your perfect spot for a drink with a view and some Texas barbecue.

If heights scare you, you can check out the numerous food trucks Dallas offers instead.

One of the best things to do in Dallas is to visit the Deep Ellum entertainment district if you’re into arts and entertainment. Full of street murals, art galleries, brewpubs, Tex-Mex eateries, and concert venues, something is happening every night of the week at this hub of urban art.

Everything is bigger in Texas, and nowhere is that statement more accurate than at AT&T Stadium, home of the Dallas Cowboys. AT&T Stadium is not only the largest domed structure in the world but it also boasts an art museum and classroom.

If you prefer your tours to be more on the spooky side, you must check out the Dallas Ghost Tours offered by Dallas Terrors.

With several hundred years of strife and struggle, Dallas’ ghosts are as varied as the city itself. This two-hour tour will regale you with some of the most famous ghosts and hauntings.

The only museum of its kind in the Southwestern Region of the U.S., the African American Museum of Dallas seeks to preserve and display African American artistic, cultural, and historical artifacts.

Ongoing exhibits include Facing the Rising Sun, which presents artifacts from the community known as Freedman’s Town (now known as Uptown), and selections from the Billy R. Allen Folk Art Collection.

Admission to the museum is free unless you’re with a group of over 10 people. Donations are strongly encouraged.

The trolley, which has been in operation since 1983, features historic streetcars and is free to the public. It connects to the DART light rail system to allow residents and visitors to easily explore the city.

The eight cars currently in service are named:

There are several cars not currently in service awaiting restoration and a few former cars that are out of service.

If you have kids, one of the can’t-miss things to do in Dallas this summer is to visit the LEGOLAND Discovery Center Dallas Fort Worth. This indoor family entertainment center is located between Dallas and Fort Worth.

General admission starts at $24.99 per person. You can also buy combo tickets to LEGOLAND and nearby SEA LIFE for $36.99.

The Katy Trail is a 3.5-mile path that runs through Dallas’s Uptown and Oak Lawn areas. The trail follows the course of the Missouri-Kansas-Texas Railroad, which was known as the MKT or the Katy.

Get out in nature and stroll down a piece of Dallas history on this beautiful path.

The Nasher Sculpture Center houses the Patsy and Raymond Nasher collection of modern and contemporary sculptures. It is adjacent to the Dallas Museum of Art in the Dallas Arts District.

Visitors can stroll through the light-filled galleries and peaceful outdoor sculpture garden for free on the first Saturday of the month. It is no more than $10 per visitor on other days.

Located just north of Dallas, the Southfork Ranch is a conference and event center famous for being the set for both Dallas television series. Specifically, the 5,900 square-foot Ewing Mansion has served as the show’s exterior, and the ranch has been featured in other media throughout its history.

Visit the ranch and take a Dallas TV tour for $16, where you can also take horseback riding lessons, trail rides, or attend a wrangler day camp.

The Hall of State is a building commemorating the history of the state of Texas. It is also considered one of the best examples of Art Deco architecture in Texas. It was built in 1936 for the Texas Centennial Exposition and is now on the National Registrar of Historic Places.

Take a Day Trip to Fort Worth from Dallas

One of the best things to do in Dallas takes advantage of all the nearby attractions and cities. Fort Worth is just 30 minutes west of Dallas, making it easy to plan a day trip to check out some of Fort Worth’s top sights.

One of the top places to see is the Fort Worth Stockyards, which take visitors back to the old cattle drive days of Texas’s remarkable history. Watch as drovers take cattle up the Chisholm Trail to the trailhead. You can also meet cowboys at Stockyards and visit original shops.

Additional Best Things to Do in Dallas: Honorable Mention

Can’t get enough of Dallas? Check out a few of these other top sights:

10 Justifications for Hobbies and Travel Over Accumulating Wealth

21 Best Travel Gifts for Women That She Actually Wants

Fun, Low-Cost Things To Do in Each of the New England States

Moving to a New City? These Are America’s Most Neighborly Cities in 2022