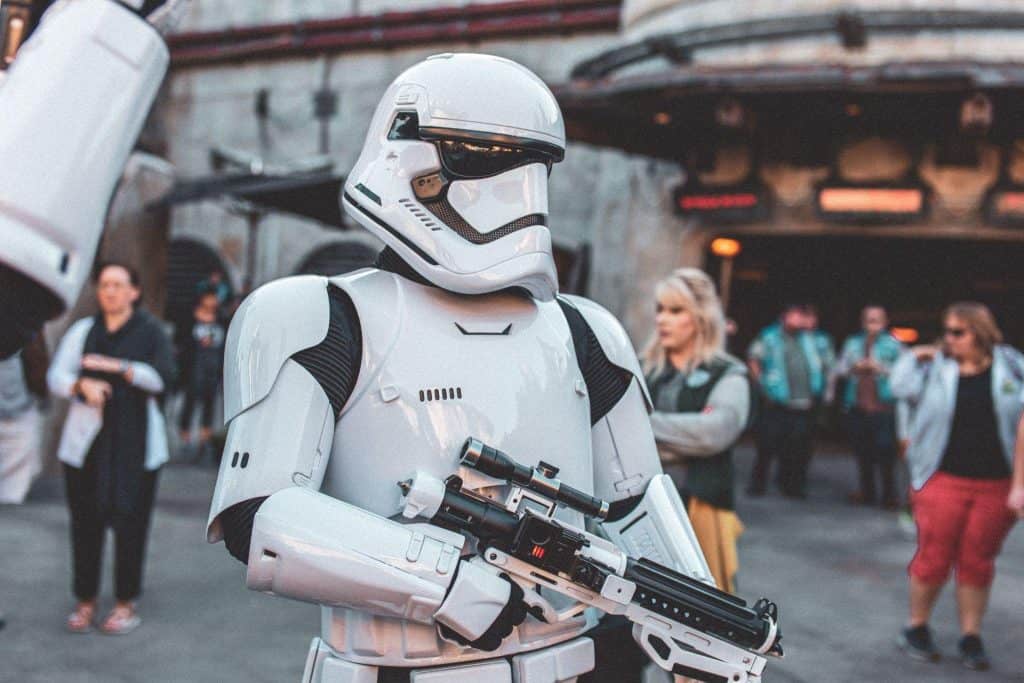 Time to raise a glass of blue milk because we are one podrace lap away from May 4, Star Wars Day.

With a mix of classic and new Star Wars legends, in honor of the big day, we rounded up some of the most interesting Star Wars stats to boost your knowledge before the big day arrives.

Our friends over at Shane Co. went into hyperdrive and researched the most Star Wars-obsessed states in the U.S and other search-term-based data on one of the most popular franchises of all time.

Potential spoilers ahead, read with caution.

Google Trends ranks each state from zero to 100 for any given search term. A state’s rank is based on search interest for a keyword proportionate to all searches in the state during a certain period.

To determine the most Star Wars-obsessed states, Shane Co. totaled and researched 217 search terms in the following categories, heroes/Jedis, villains/Sith, locations, vehicles, and alien races. As a result, they determined which states searched the most Star Wars-related topics and the most popular ones by category.

The search terms were collected in February of 2022, tracking searches over the last three years for each term from February 2019 to February 2022.

It’s the wild west out in the galaxy; no wonder the top five Star Wars-obsessed states are in the western part of the U.S.

Coming in at number five is California. Not only does it make the list, but the state is home to original filming locations of the Forest Moon of Endor (Del Norte County) and various scenes on Tatooine (Death and Buttercup Valley), not to mention all of the new Star Wars live action shows on Disney+

Behind California is Colorado, and surprisingly, their most searched location isn’t Hoth.

In third place is Oregon. Following suit with California and Colorado, the most searched hero is the most famous astromech droid in the galaxy, R2-D2.

First place goes to Utah as the most Star Wars-obsessed state. This is the first state in the top five not to have a droid as its most searched Hero/Jedi. The search terms that cracked the top of Utah’s list are more popular ones, contrary to the other states that showed more niche or lesser-known terms.

The cutest little Jedi in training, Grogu was the most popular Hero/Jedi searched throughout the United States. Grogu beat classic characters from the Star Wars universe by a long shot.

Unofficially nicknamed “Baby Yoda,” this foot-tall carnivore stole the hearts of Star Wars ultra fans and casual fans alike. Even those who don’t consider themselves fans melt at his alien coos. Not bad for a combination of puppetry and CGI.

Sheev Palpatine or Darth Sidious, the main antagonist in much of the film and TV renditions of Star Wars, gained a boost in popularity. Surviving from what we thought was his end in Return of the Jedi, his soul entered a clone of his body and announced himself as the grandfather of the Jedi Rey in The Rise of Skywalker.

Even after more recent releases like “The Rise of Skywalker,” “The Mandalorian,” and “The Book of Boba Fett,” the 2017 movie cracked the top most searched Movie/TV show of the Star Wars franchise. It’s the second highest-grossing Star Wars film behind The Force Awakens and ranked 15 among the highest-grossing films of all time.

The movie marked the end of the Skywalker legacy to make room for a new era of stories set in the galaxy far, far away. Although that hasn’t stopped Disney and Lucasfilm from exploring more in depth stories of fan-favorite characters from the original films and beyond.

Although the Wookie homeworld didn’t see much screentime to show off its furry residents – unless you count the infamous 1978 Star Wars Holiday Special – it made the top searched location. Chewbacca would be proud.

Surprisingly neither the Millennium Falcon, which made the Kessel Run in less than twelve parsecs, nor the Death Star destroying X-Wing made the top most searched list.

Not-so-fun fact: At the peak of the Empire, they boasted over 25,000 Imperial Star Destroyers.

The Sith are not just a sect like the Jedi Order. Sith (also referred to as Sith Purebloods or Red Sith) is a species of red-skinned, humanoid aliens. The majority of the population were force-sensitive and embodied, you guessed it, the Dark Side of the Force.

Exiled Jedi found the Sith species and began reigning over them as Sith Lords, creating the Sith Order. After the Jedi-Sith War during the fall of the Old Republic and interbreeding between Sith and humans, red-skinned Sith are extinct as we know them today.

Fun Fact: According to the comics, the Sith species favors left-handedness.

The 2015 movie “The Force Awakens” reached a worldwide gross of $2,069,521,700. It’s also currently the fourth highest-grossing film of all time after James Cameron’s “Avatar,” “Avengers: Endgame,” and “Titanic.”

Star Wars is presently the second highest-grossing film franchise, behind the Marvel Cinematic Universe, and has a total worldwide box office revenue of over ten billion U.S. dollars.

The sale made the droid the most expensive Star Wars memorabilia ever sold.

An Adorable Filming Cover Up

Porgs are little bird-like creatures that inhabit Luke Skywalker’s island on Ahch-To. They aren’t just a cute addition to annoy Chewbacca; the filming location is a reserve for puffins. Unfortunately, the film’s creators couldn’t legally move the puffins, and editing them out was challenging, so they created porgs.

So Let’s Settle This, Who Shot First?

In the original 1977 release of “Star Wars: A New Hope,” in the Mos Eisley cantina scene where Han Solo is confronted by the bounty hunter Greedo, Han shoots Greedo dead. George Lucas later edited this scene in the 1997 Special Edition re-release of the film where Greedo attempts the first shot.

Lucas wanted it to appear that Han acted in self-defense; fans stood on the offensive after this change, making it an incredible controversy amongst the Star Wars community. Many fans thought it went against Halo Solo’s character.

Star Wars spans generations of fans, and creators show no hints of slowing down. There are more galaxy adventures in the works, legends to discover, and hopefully more facts to uncover.