Review: ‘Marry Me’ is a Jennifer Lopez Concert Ticket, but Not Quite a Valentine’s Day Rom-Com

Netflix isn’t the only studio capitalizing on society’s hunger for trope-filled rom-coms and feel-good romances. Universal Studio’s ambitious Jennifer Lopez and Owen Wilson-led film Marry Me sings its way into theaters this Friday just in time for Valentine’s Day, with, unfortunately, lackluster appeal.

Based on Bobby Crosby’s graphic novel by the same name, Marry Me tells the story of international popstar Kat Valdez (Lopez) who is set to marry her hunky fiance and fellow popstar Bastian (Maluma) live, on stage, in front of her millions of adoring fans. Seconds before the ceremony is set to begin, Page Six leaks gutwrenching footage of Bastian cheating on Kat with her personal assistant, which sends her into a tailspin on stage in front of an audience.

Instead of having a complete breakdown, Kat locks eyes with a man in the audience–Charlie Gilbert (Wilson)–who happens to be holding a sign that reads “MARRY ME.” For reasons beyond my comprehension, but ultimately because this is a movie and it furthers the plot, Kat decides to marry Charlie right there on the spot.

Look, it doesn’t make a whole lot of sense considering the fact that he’s only holding the sign because her single is quite literally entitled “Marry Me” and Kat has no idea if the man, who is very clearly standing beside his daughter Lou (Chloe Coleman), is married or in a relationship. But it’s a rom-com, so it’s okay to take wild leaps beyond the realms of believability. 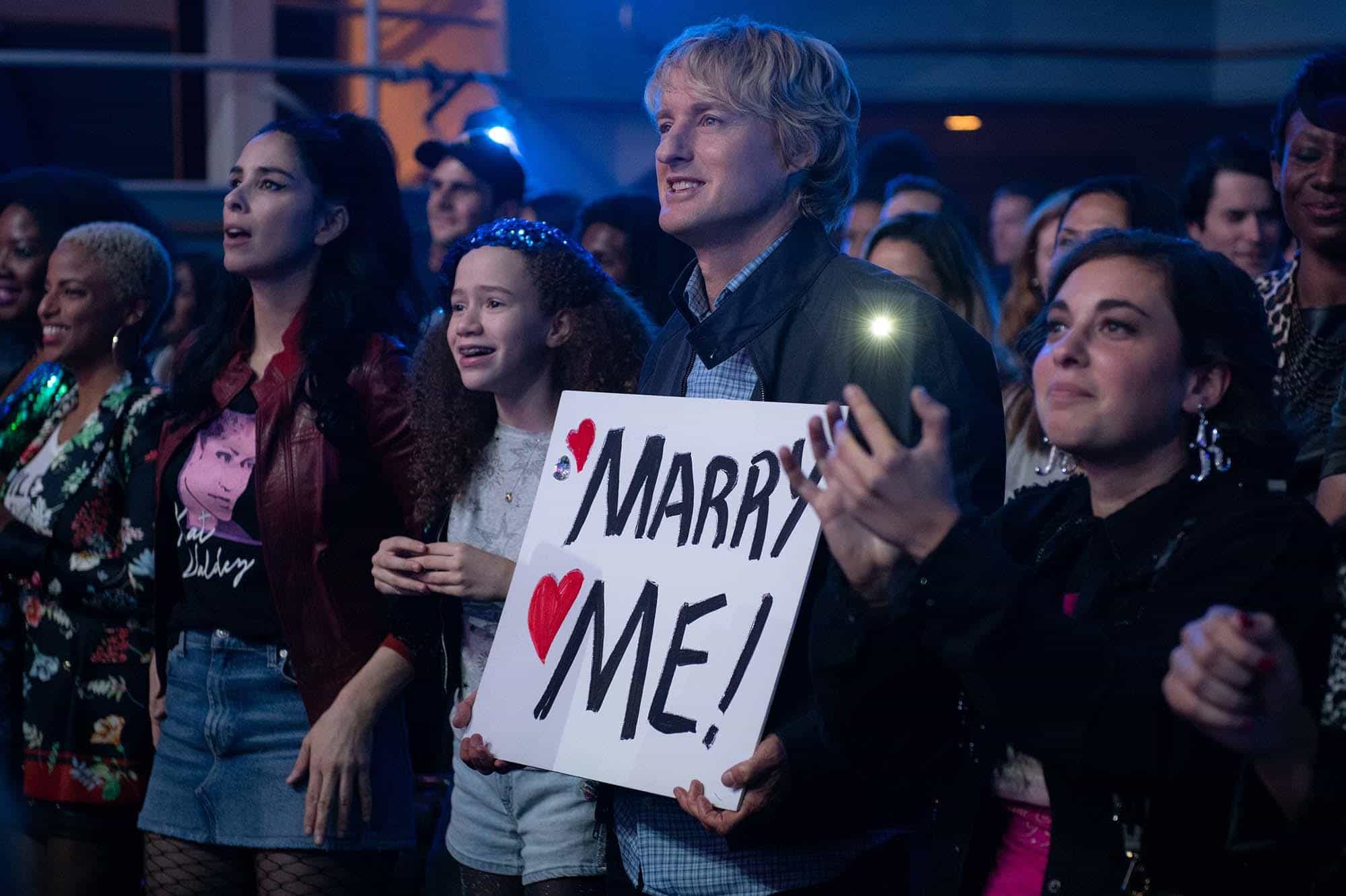 Rather than getting the spur-of-the-moment marriage annulled, Kat decides to prove the world wrong about her allegedly fickle nature and decides to convince Charlie to stay married to her. If only to keep up appearances. Marry Me plays into the more recently popular trope of a “PR relationship” which is just a Hollywood-ized version of the “fake dating” trope.

There are a lot of very cute moments during their whirlwind for-show romance, where you see how these two could work together. Kat is clearly yearning for someone who actually cares about her–and Charlie is so unimpressed by stardom, that he’s one of the only people who actually asks her how she’s doing and talks to her when she’s stuck in long late-night car rides after shows. For Charlie, the marriage gives him a lot of street-cred with his pre-teen daughter and the math students he teaches.

For all of the cute tropey moments that Marry Me features, there is a lot that doesn’t quite hit the mark for me. J. Lo exudes so much natural confidence and elegance on the screen, and she has chemistry with everyone other than Wilson. I had a hard time buying that she was actually falling in love with him and not just the idea of a nice, safe, normal guy who would never cheat on her because she’s so far out of his league. On the flip side, Charlie has some odd dialogue that was designed to make it seem like he was really into her (the whole bit where they’re dancing to the soundtrack of Camelot) but it came across as cringey and tryhard. 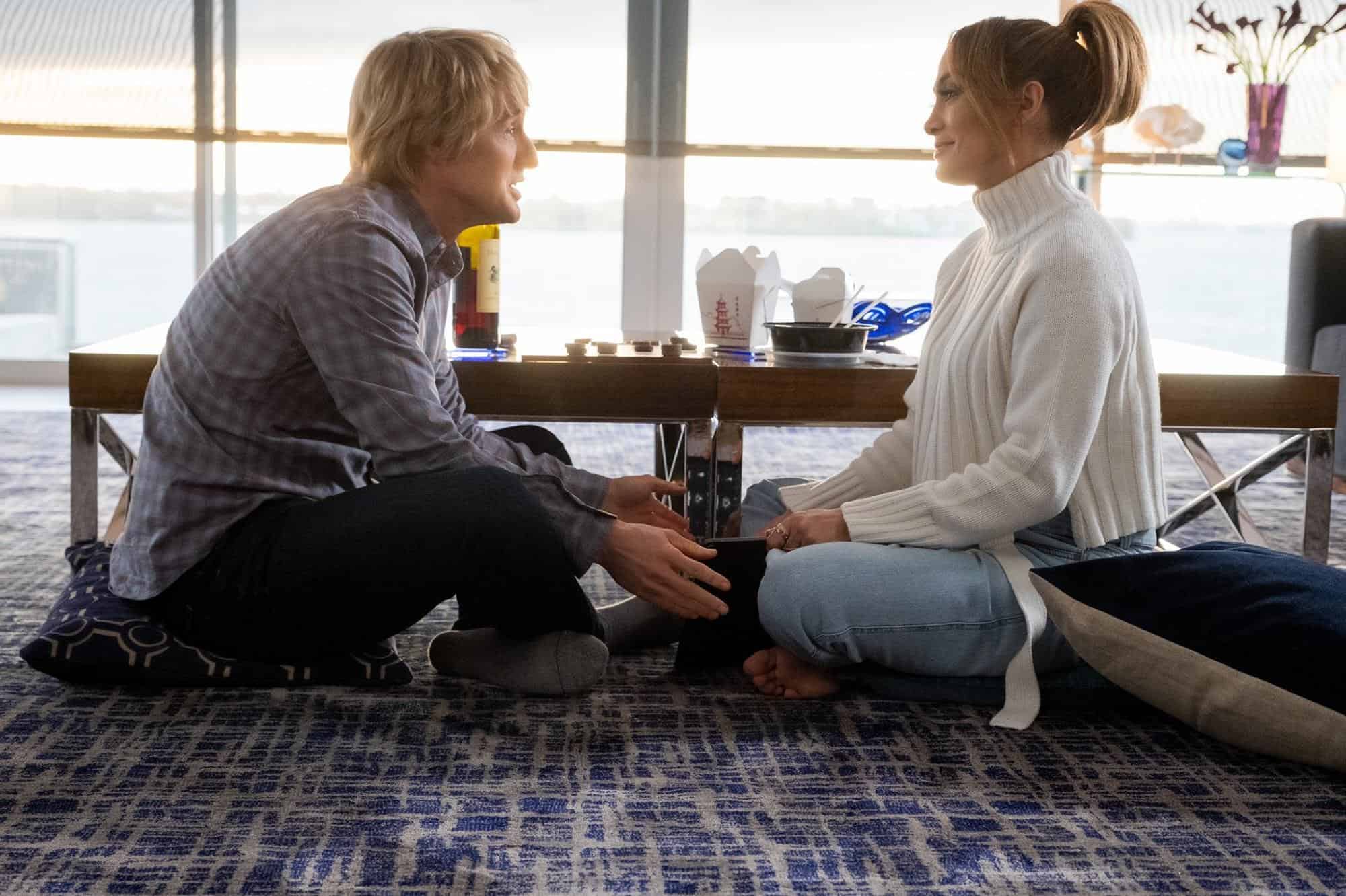 For all the marketing that said there were forces “conspiring” to separate the unlikely newlyweds, I certainly didn’t see anything outside of a few low-risk hurdles that literal strangers would naturally have to overcome after an unexpected marriage. There’s an adjusting period for both of them to figure out where they fit into each other’s lives and then it all eventually works out, with very little tension in the process.

On the production side of things, the audio mixing was all over the place. The musical numbers were often too loud and the dialogue scenes were hard to hear in contrast. There were also too many musical numbers, which often felt like they were just there to remind us that Jenny from the Block still has it. The musical numbers, though fun, weighed down the plot, causing the film to drag its way towards the finish line. Unfortunately, I’m not sure if Marry Me wanted to be a J. Lo concert or a rom-com.

Marry Me has plenty of fun moments, but it lacks the tension and sizzling chemistry necessary to seal the deal. It owes any success to the star power of Jennifer Lopez and the fans that will show up, expecting something as tantalizing and as fun as The Wedding Planner or The Back-up Plan.

Marry Me is in theaters on Friday, February 11.

Maggie Lovitt is the Managing Editor of Entertainment at Your Money Geek, where she covers her favorite topics: Star Wars and pop culture nerdery. She is also a freelance writer and a contributor at Collider and Dorkside of the Force. When she is not covering entertainment news, she can be found on one of her numerous podcasts or her YouTube channel. In her free time, she is also a novelist, screenwriter, actor, and a member of the Screen Actors Guild.
JOIN US